... an atmospheric bed-time story about a bumbling robot with a feedback loop that's fun, relaxing and rewarding.
by Lee Chesnalavage 11/03/2018

Jettomero wakes up on a desolate moon. Alone and with no memory of who he is, the gargantuan crimson robot fuels up his jets and blasts off the moon to find purpose.

He quickly discovers a planet where life flourishes; light spills out of tiny buildings and little rocket ships launch off into space, but these little pockets of human refugees are heavily militarised and they don’t take kindly to his presence. Although they can’t damage him, aircraft surround him like bees round honey, firing rockets at his head; and down on the ground the civilised populace shoot giant ropes at his feet to try and trip him. It’s like a scene from The Empire Strikes Back! But on this planet resides a monstrous beast that only Jettomero can destroy. That’s when it hits him: he will travel from galaxy to galaxy and save the human race from the antagonising alien kaiju that terrorise them, and become hero of the universe!

Jettomero: Hero of the Universe is a 3D adventure with a beautiful art style inspired by 1970’s sci-fi comics, where you explore procedurally-generated solar systems to find fuel, dig up robot body parts, kill massive monsters and unlock Jettomero’s repressed memories. It’s not a challenging romp through space but Gabriel Koenig didn’t intend it to be. It’s an atmospheric bed-time story about a bumbling robot with a feedback loop that’s fun, relaxing and rewarding.

In Jettomero you can freely fly through space and it’s brilliant! You can twist and turn to your heart’s delight, leaving clouds of vapour in your wake. There’s nothing quite like it – I can’t think of anything else that has made me leave real-word physics behind and made me feel like an innocent kid! You can visit new solar systems by falling through wormholes and getting spat out the other side, and you’ll be amazed all over again – the solar systems never get any bigger but they will always feel like visiting new, unexplored playgrounds. Saving planets is accomplished by winning a QTE fighting mini-game against the gruesome monstrosities that look like they’ve been cobbled together with loose bits of clay. These fight sequences reminded me of Rock’em Sock’em Robots and I feel this was a deliberate attempt to remind us of the 70’s – mashing buttons on a DualShock felt very similar to hammering away at the back of a plastic robot boxer.

When an enemy is defeated Jettomero overheats, loosening a repressed memory from the crevices of his mind. You have to decipher the encrypted message in another mini-game where you twist knobs on a computer until the jumbled letters make sense. Deciphering memories will be the most difficult segments you will encounter. It’s not that they’re hard; it’s that they require more logical thinking than the QTE combat and open-world exploration does. Once decrypted you’re treated to some comic slides that tell the tragic backstory of the humans, Jettomero and the monsters.

There aren’t many dangers in Jettomero. The humans shooting at you can’t leave a dent on your metal skin, and there are environmental obstacles like cosmic lightning storms but all they do is drain your energy (which is really easy to find on a planets or by crashing into asteroids). Flying into the sun kills you but the game is so forgiving that you’re instantly respawned without consequence. Jettomero doesn’t ask anything of you, other than to enjoy yourself at your own pace.

Every planet has robot body parts hidden inside. You can collect them to customise the way Jettomero looks – you can change his head, body, arms and legs to build a robot that’s unique to you. However, digging up body parts is entirely optional. I didn’t find myself worrying about it too much. I gave my guy some devil horns and space cowboy boots, but that was about it. If you’re a completionist though there’s nothing holding you back. 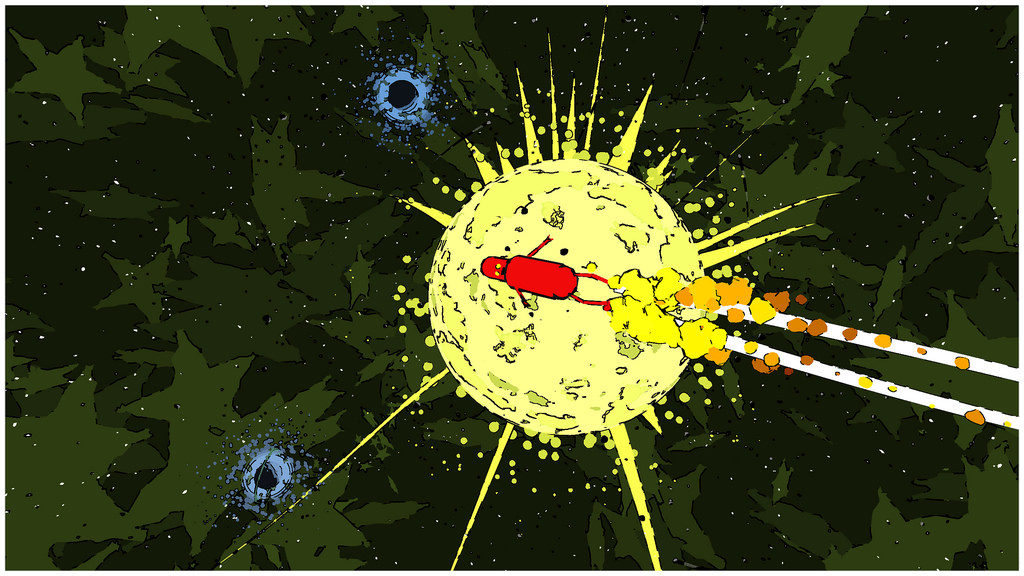 The most striking quality Jettomero has is its cel-shaded, block-coloured art style. There’s no blending between colour and shadow – just clean, simple lines to break them apart. The game features a thin white border around the edge to remind you you’re experiencing an organic, interactive comic. The lighting effects are amazing too. When you’re not facing the sun Jettomero, along with the planet he is on, will be steeped in darkness. Fittingly, it has a photo mode, so you’re able to capture the wonder of it all and show everyone you know.

My only problem was with the default controls. I quickly found myself in the settings changing a bunch of invert options. Flying in space with inverted controls felt natural because it wasn’t any different than flying a plane, or swimming in Abzu, but trying to rotate the camera inverted was irritating. Once I spent a little bit of time finding the perfect set-up it wasn’t a bother.

On a deeper level I found a parallel to Frankenstein’s Monster. Here is a creature, or in this case an autonomous AI, who has been created by man, only to be abandoned in the world without any guidance or reassurance that what he is doing is right. After a while you begin to feel sorry for Jettomero because he’s helping the humans out but receives no praise or gratitude; only harassment from the people he’s attempting to protect. When you destroy a building Jettomero is vocally apologetic, with little speech bubbles to let you know of his guilt. It’s obvious the big guy has feelings but not once do the humans try to reason with him. The irony is, despite all of his flaws, Jettomero is the only one capable of exterminating the invasive galactic colossi.

Why? Jettomero: Hero of the Universe is a beauty to behold, not just in its visuals but in its simple-but-inclusive gameplay. It’s a story of redemption and finding your place in the world, and trust me, Jettomero delivers on that promise. If you like blissful exploring games like Journey or Abzu then Jettomero will scratch that itch.

But… There’s no detailed crafting system or skill trees, and the open-world solar systems are actually quite tiny – but it’s not fair to compare Jettomero to The Witcher 3. It’s not a challenging game that will test your skills or patience, so if you’re looking for something with more meat and aggression then Jettomero isn’t the game for you.

Tanked Up 108 – Brewdog Screws the Pooch