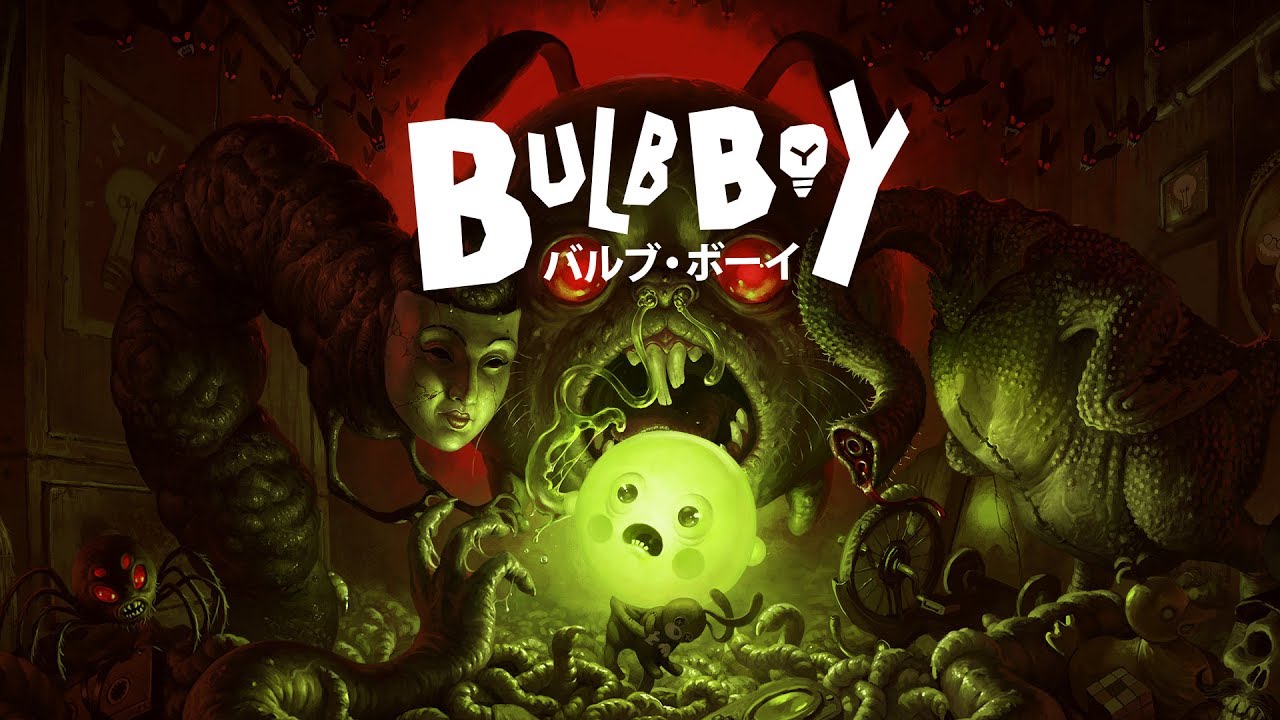 ... Bulb Boy manages to make the conundrums make sense... even if you're not entirely sure what's happening
by Lee Chesnalavage 12/03/2018

Bulb Boy is a 2D clicky horror adventure set in an old school GameBoy-Green world where the living inhabitants have heads made of glass. A little boy with a bulb for a head (I assume this is Bulb Boy) is watching TV with his granddad. Granddad falls asleep, so Bulb Boy pops off to bed but while he’s sleeping a floating black orb sporting tentacles infects the old geezer. Bulb Boy wakes from a nightmare and goes to find Granddad for a cuddle but when he finds his ol’ pop he transforms into the Thing and escapes through the roof. Putting his bravest face on, Bulb Boy follows it, intent on rescuing Granddad from it’s evil, spindly clutches! Straight off the bat you need to know Bulb Boy is weird. It’s weird on purpose. For those of you approaching 30 you might remember Salad Fingers (created by David Firch) and short animations on Weebls Stuff. Back when I was in school and the internet was becoming indistinguishable from reality flash cartoons were what we all lived for, and the weirder they were the better. Usually these cartoons would be nonsensical ramblings – a series of random events that seemingly made no sense but still managed to squeeze out a pulp that resembled a story.

… I just remembered Charlie the Unicorn… I’m getting old. Anyway… Growing up loving Cronenbergian animations, Bulb Boy caught my eye but while playing it I felt entirely desensitised to all the madness unfolding before me. It’s supposed to be shocking and grotesque – and it is – but I found myself shrugging at it and taking it at face-value. It’s most definitely unsettling to play and there’s plenty of creepy imagery to bite into but eventually it washes over you and the magic wears off. It’s also worth noting that the entire game is green. Like an old GameBoy. It’s a colour that gets nauseating to look at – I wouldn’t surprise if this was intentional.

The themes are also horrifying. There’s an emphasis on decay with rotting flesh, bones and damaged goods scattered about the levels, and an emphasis on body horror – especially your insides. Puss and blood will squirt out of defeated enemies and chopping off body parts is introduced early on. The one theme that devalued Bulb Boy for me was anything linked to evacuating the bowels. It was cringy but for the wrong reason. I’m not entirely sure if it was supposed to be funny or vomit-inducing but there’s a boss fight straight out of Kevin Smith’s Dogma and an entire level swimming past floating caca. After playing Bulb Boy I’ve seen enough digital turds to last a lifetime. Contrary to the themes and art style, the puzzles are actually logical and you won’t have a problem solving them. Somehow Bulb Boy manages to make the conundrums make sense and natural to play, even if you’re not entirely sure what’s happening. Unfortunately, Bulb Boy is far too easy. The most challenging part for me was my poor timing – especially with a set of gnashing teeth later on in the game. Bulb Boy only has one speed and it’s not possible to approach a situation with a flourish of quick dashes, so patience and timing is key most of the time. In its defence, there are a variety of death animations to revel in if you do happen to die with frequency. I can honestly say that I didn’t enjoy Bulb Boy and please don’t take that as me saying the game isn’t worth playing or that it’s a terrible game because it’s neither of those things. On this occasion this game didn’t leave its impression on me. I felt apathetic and I think it’s because Bulb Boy has an haunting gross-out aesthetic that was easy to ignore. I felt like I was on auto-pilot the entire time, running back-and-worth, dropping quest items all over the place until a door opened. Rinse and repeat. End credits.

Why? It doesn’t feel fair to say not to when the game is a perfectly functioning game, and just because it didn’t strike a chord with me that doesn’t mean it won’t for you.

But… It tries too hard to be weird and unnerving and eventually you start to see through it.