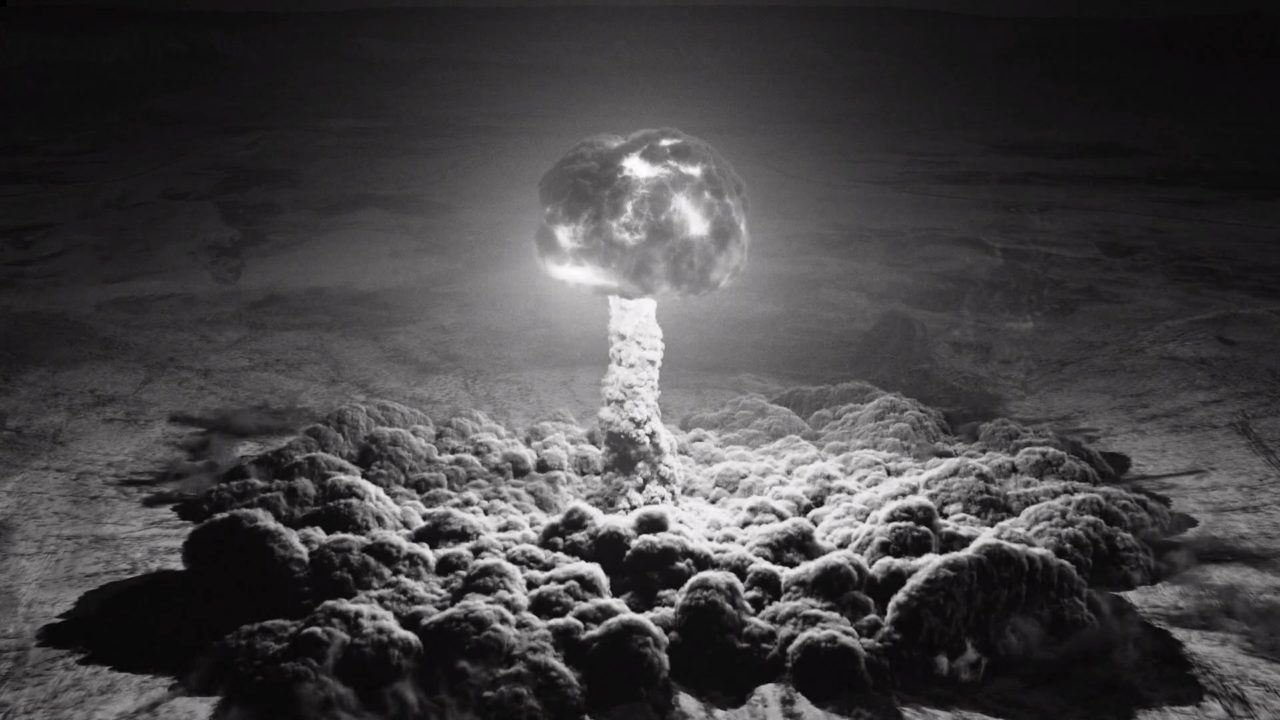 Nolan vs Lynch: Battle of the Bombs

How Twin Peaks and Oppenheimer handle the spectacle, themes, and cosmic horror of nuclear detonation...
by Kyle Barratt 02/08/2022

The nuclear arms race of the Cold War is now reflected in modern cinema, with two directors vowing for domination over capturing the incredible and terrible spectacle of an atomic explosion. Okay, maybe I’m overdramatizing things considering one of these directors is David Lynch, who is wonderfully too preoccupied with daily weather reports to care, but if the trailer for Christopher Nolan’s Oppenheimer is to be believed, there is no way to overdramatize such a thing. According to that, Oppenheimer’s creation is the single most important event in the history of mankind in a play-it-for-all-it’s-worth event blockbuster, trying to capture the awful majesty (insert other oxymorons here) of nuclear detonation like never before. And yet, we have seen it before.

The brief footage of the explosion in the trailer, that of swirling fire as abstract art, reminded me so much of the mushroom cloud from the modern season of Twin Peaks. Perhaps the defining moment of his 18-hour magnum opus, David Lynch flashes back to July 16th 1945 for one of the greatest and most abstract pieces of television ever produced. A prolonged, patient camera-move across the desert, drawing closer to the first atomic explosion and eventually entering its clouds of flame, and then minutes of abstract expressionism of dark shapes and patterns as something evil is truly unleashed. It’s a perfect sequence, from the visual effects to the music drop – if one can ‘drop’ Penderecki’s Threnody for the Victims of Hiroshima. That David Lynch managed to do such a thing, or rather was allowed to do such a thing, on television is a miracle. It is the nuclear explosion scene, regardless of the big or small screen. But now Nolan comes along.

The two directors’ work shouldn’t have to be compared but they are seemingly covering the event in similar ways. Not only could the footage seen in the Oppenheimer trailer be lifted from Twin Peaks – it’s that identical – but both are tapping into the recent trend of nuclear power presented as cosmic horror. Cosmic horror is the terror of the unknowable, the incomprehensible, the so-big-our feeble-minds-can’t process-the-magnitude-and-our-cosmic-insignificance-in-the-universe-able. Once it was Lovecraftian, cosmic entities and forbidden knowledge on a massive scale, but Chernobyl changed things. That show gave radiation the starring role as the uncontrollable, unknowable, grandiose horror that mankind unleashed in its arrogance. Now the bomb itself is a focal point of cosmic horror, a doorway to evil just as much as a book of spells in an old horror story.

Lynch may deal with horror elements – with the evil alien interdimensional demons of Twin Peaks, or however you want to explain them, if indeed you do – but he makes it clear that mankind’s creation and use of the atomic bomb is the key, core origin story of evil in his universe, leading to the birth of BOB. Judy – the grand cosmic evil of the universe – may exist but it’s the bomb that gives her the energy, the food, the Garmonbozia, to birth BOB and begin her power over Earth. The explosion, the devilry of man, is the catalyst for everything: the evil, and the good’s response.

Now, we’re not going to see the same obvious horror elements in Oppenheimer, but the bomb, the explosion, as seen in the trailer snippets, is the same awe-inspiring pure devastation as we see in Twin Peaks. Not only that, and the fact both are in black-and-white, but the focus is again on the evil of man. What mankind’s – or Oppenheimer’s – hubris unleashes onto the world in a watershed moment. It may be more straightforward biopic fare but the themes are the same in both properties. Both detonations are horror scenes. The only differences are the sensibilities of the directors: are you more a Lynch fan or a Nolan fan?

So, both directors are presenting the bomb in a similar way, from the visuals of the explosion to the ideas behind it. Oppenheimer realises the horror he has birthed, but Nolan and Lynch separate when it comes to how literal or metaphorical that statement is. But, in the battle of the bombs, there is something Nolan has over Lynch: the budget and time of a movie. The behind-the-scenes documentaries for Twin Peaks are just as watchable as the show itself and we see Lynch become frustrated several times at the restrictions of television. The fact that the show is as good and as bonkers as it is is a miracle considering. I’m more of a Lynch fan than a Nolan, although I do enjoy his films, and I doubt Nolan can ever win this fight against one of the greatest episodes of television ever produced. Yet, despite my cries, Twin Peaks isn’t shown on the big screen while Oppenheimer is built for it. In terms of tone, style, imagination, terror, and every other conceivable measure, Lynch wins. But spectacle? That is Nolan’s domain and the area he could, conceivably, best Lynch.

Who do you think will win the battle of the bombs? Let me know in the comments and be sure to geek out with me about TV, movies and video-games on Twitter @kylebrrtt.