With 5 releases including a big DLC drop for Fallout 4, there is plenty to keep Xbox gamers busy. Here is the run down of what you can buy this week. Homefront: The Revolution – Released May 17th on Xbox One

Developed by Deep Silver and Dambuster Studios, Homefront: The Revolution is set in an alternate reality in 2029 four years into the North Korean invasion of the United States, Philadelphia is under occupation by the KPA. The new Philadelphia is a heavily policed and oppressed environment, with civilians living in fear as the Korean People’s Army patrol multiple districts in the city. In the city, a second rebellion is brewing and the resistance grows stronger, being led by Parrish, the resistance leader, and youngest member of the resistance, Ethan “Birdy” Brady. The story will follow Ethan and the new resistance as they attempt to retake Philadelphia. Mimic Arena – Released May 18th on Xbox One

Mimic Arena is a local couch multiplayer platform shooter that focuses on high energy and quick reflexes. Up to four buddies are pitted against one another, but only those who have mastered the arts of jump and shoot dare hope to stand a chance, thankfully you will have some backup. Everything the player does, wherever they go, and wherever they fire; is recorded and then played back again as a Mimic. These clones will be an integrate part of any players arsenal. Providing distractions and supporting fire for new players and enabling more advanced strategy such as zoning and coordinated attacks for veterans. Super Night Riders – Released May 18th on Xbox One

Super Night Riders is a modern arcade racing game inspired by the retro classics. You are Alice, a beautiful and talented motorcyclist known as the red rider. In this game, your position in the race does not matter. It’s all about traveling as far as possible while dodging the rival riders, and reaching each checkpoint before the timer goes down to zero. The gameplay is fast and responsive similarly to the best retro racers, while the low-poly style is inspired by the early 3D arcades. 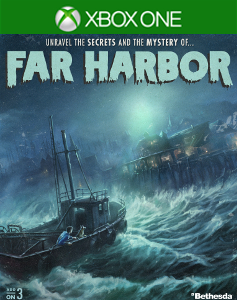 Fallout 4: Far Harbor – Released May 19th on Xbox One

A new case from Valentine’s Detective Agency leads you on a search for a young woman and a secret colony of synths. Travel off the coast of Maine to the mysterious island of Far Harbor, where higher levels of radiation have created a more feral world. Navigate through the growing conflict between the synths, the Children of Atom, and the local townspeople. Will you work towards bringing peace to Far Harbor, and at what cost? Far Harbor features the largest landmass for an add-on that we’ve ever created, filled with new faction quests, settlements, lethal creatures and dungeons. Become more powerful with new, higher-level armor and weapons. The choices are all yours. Cubikolor – Released May 20th on Xbox One

Evolve your cube by playing on the correspondence between the color of your faces and colors of the tray to reach the end of each level . With your cube and your logic your only asset, go through hundreds of levels to avoid the pitfalls of the system , malignant and calculator entity, to prove your face value to the machine and pass the test !

Discover many special boxes with surprising effects , and evolve through the various game atmospheres in Classik mode or Hardkore .