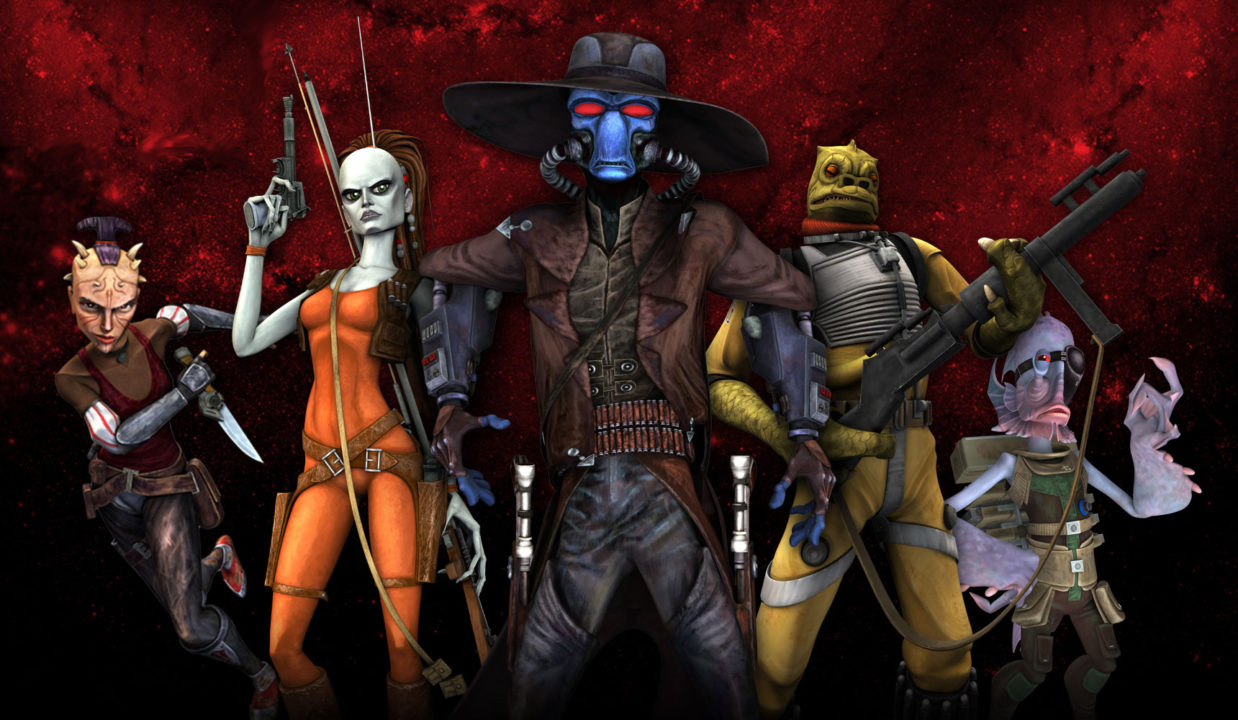 Characters who should appear in Star Wars Rebels: Bounty Hunters and Misfits

"Now it’s time for the bad batch, the bounty hunters and misfits of the Star Wars galaxy"
by Kyle Barratt 30/08/2016

Ever since we peeked into the Mos Eisley Cantina in 1977 Star Wars fans have always been fascinated by the characters on the fringes of the Skywalker saga but that’s all they could be at the time: passing glimpses of creatures that would become sought after action figures. These characters were the misfits, bizarre aliens capturing imaginations and we got more and more of these characters as the saga progressed. When The Empire Strikes Back was released it overshadowed A New Hope in almost every way including a scene which gave us a whole new batch of Star Wars characters that made people forget all about those cantina misfits: bounty hunters. Bounty Hunters have come a long way from their humble beginnings on the bridge of Vader’s Star Destroyer since becoming a massive part of Star Wars lore. Star Wars Rebels is one part of the new canon that explores such figures on the edge of heroism and criminality with its core cast of characters and the people they interact with such as Hondo. With Rebels already including characters from the old legends continuity with Thrawn and classic movie characters like Lando and Leia it seems like season 3 will include even more. I’ve already listed the Rebel Alliance characters I’d like to see appear on the animated show as well as Imperial characters (Part 1 Part 2) but now it’s time for the bad batch, the bounty hunters and misfits of the Star Wars galaxy.

You can’t talk about bounty hunters and not mention Boba Fett. While generally overhyped Fett is as cool as he is iconic and who wouldn’t love to see him pop up once or twice in Star Wars Rebels especially since Dave Filoni used him frequently in The Clone Wars. His appearance would link his prequel and Clone Wars appearances of a young man attempting to avenge his father while becoming a bounty hunter with his more beloved original trilogy phase of being the most kick-ass bounty hunter in the galaxy. While an appearance by the Mandalorian armoured foe isn’t necessary it would be cool to see him interact with the crew of The Ghost and it would give a certain amount of closure to the animated version of the character, concluding his ‘becoming a bounty hunter’ arc from The Clone Wars. I’m against the idea of the proposed film or TV show featuring Boba Fett as the lead, I think he is much better suited to being a mysterious supporting character, so those story ideas such as the origins of his relationship with Vader and Jabba could be shown in Rebels.

We just got one blue skinned alien announced as a villain in Rebels season 3 at Star Wars Celebration so why not another? Bounty hunter Cad Bane made a huge impact when he debuted in The Clone Wars quickly becoming a fan favourite character and the best bounty hunter in a show full of them. We know nothing about Cad Bane after the events of The Clone Wars and it would be a real shame to never see the character again with Rebels being the perfect place to reintroduce him. While some want to see him cameo in Rogue One I think Cad Bane suits the realm of animation better and Filoni and his team of writers already know how to handle the character with his ever present hat and toothpick. While not a necessity to the show his appearance makes as much sense, if not more, as Hondo turning up time and time again and Rebels is in a position to give us closure to characters and storylines left hanging after the cancellation of The Clone Wars.

Along with her murderous droids, Dr Aphra is a standout character from the Darth Vader comics as a fun, witty Indiana Jones influenced criminal who becomes Vader’s muse and partner on missions he keeps secret from the Emperor after the destruction of the first Death Star. Later becoming part of the core Star Wars comic series we know little of Aphra’s past and Rebels would be a perfect place to learn about her before she became involved with the Sith Lord. I feel this cross pollination of the different mediums of Star Wars canon is vital in making it feel like the tightly knitted and interweaving galaxy it’s meant to be. And it’s not just what Rebels can do for Aphra it’s also what Aphra can do for Rebels with the character perfectly suited for the kid friendly yet quite dark tone Rebels has been building.

The 5 issue Lando comic released last year is one of my favourite additions to the new canon so far for not only telling a great Lando tale but because it also revealed to origin of Lando’s right hand man Lobot. Lobot was not always a silent android-style man but was a smuggler with a great deal of affection for his friends, namely Lando. An ex-Imperial, Lobot was fitted with a cybernetic implant to make him run fast calculations but he was in constant danger of the machine taking over and deleting his personality and memories. As you can imagine this happens in the Lando comic and Lobot’s final words and actions are what makes Lando turn legitimate and run Cloud City. However in Rebels we could see Lando, an established character in the series, meet Lobot for the first time when he was his witty but cautious self. A cross continuity between original trilogy, comics and animated television this would aid the interconnectedness of the canon and the more we see of Lobot the more impactful the comic and his appearance in ‘Empire’ will be. Plus it would just be a really cool episode of the series and give more meaning to why Lando is in the show.

Having been alive for 1000 years and owning an establishment which attracts rogue characters it’s not a stretch at all to think The Force Awakens’ Maz Kanata would have met the crew of The Ghost at some point. It certainly would be interesting to see Maz give her unique brand of advice to Kanan and Ezra as they undergo tumultuous times in their lives in season 3 and Maz is a perfect character for animation. It would be interesting to see who hangs out at Maz’s Castle during the reign of the Empire whether it be original trilogy characters, people mentioned on this list or younger versions of those we see in The Force Awakens such as The Crimson Corsair or Wolliver. During the Q&A at the Star Wars Rebels panel at Celebration Filoni was asked if Maz could show up in Rebels to which he said that was a very good question.

A misfit of many kinds Quinlan Vos was a Jedi seen fleetingly during the prequel trilogy and appeared in one mediocre episode of The Clone Wars. However an 8 episode arc was planned for The Clone Wars featuring the character which became the canon novel ‘Dark Disciple’ after the show was cancelled. The novel focused of Vos falling in love with Asajj Ventress and turning to the dark side during a Republic-sanctioned assassination attempt on Count Dooku. While I won’t spoil the amazing novel here it leaves Vos in an interesting place and frame of mind not long before Order 66 and the birth of the Empire. While he could have died like the vast majority of other Jedi during that period we just don’t know what happened to him. After becoming attached to the character while reading Dark Disciple I’ll be disappointed if we never get a follow up and right now Rebels looks like the most logical place to do it with Vos’ journey mirroring what may happen with Ezra.

So that concludes my four part series on characters that should appear in upcoming episodes of Star Wars Rebels. Which characters do you want to see pop up in Rebels? Let me know in the comments and geek out with me about Star Wars on Twitter @kylebrrtt.