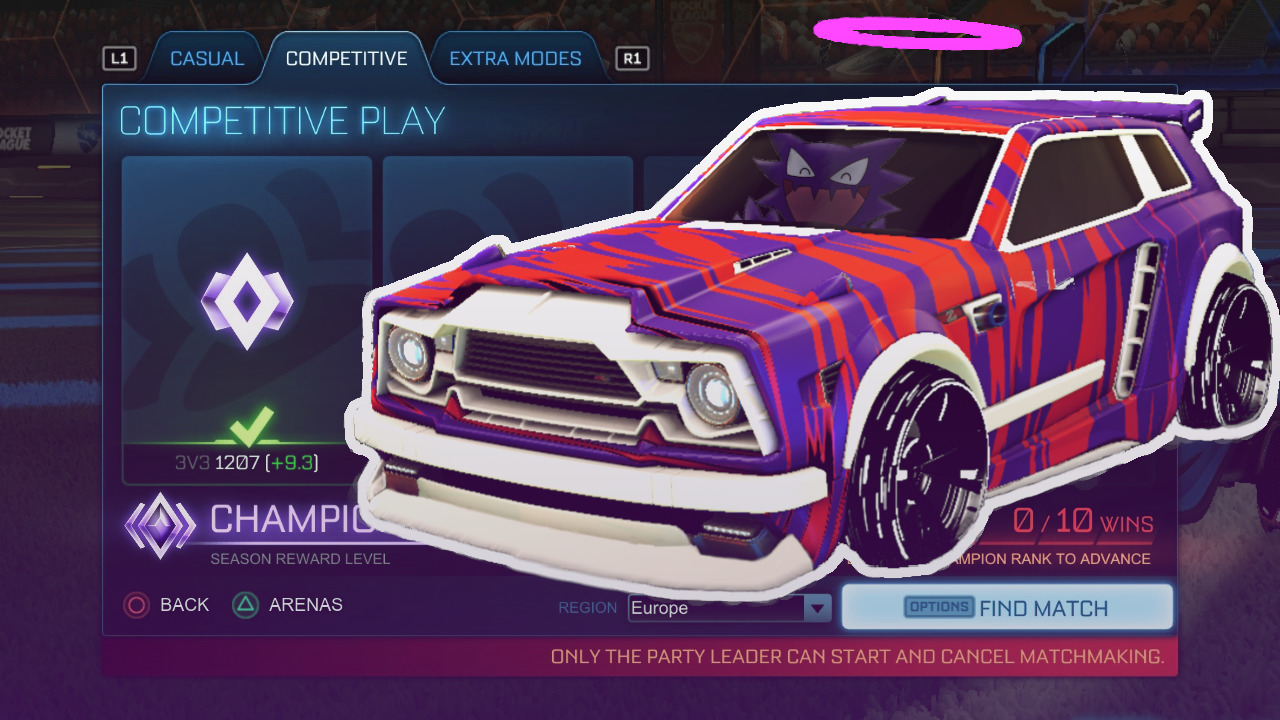 A Champion Is Made

5 years, 634 hours, 14 competitive seasons, thousands of games and millions of ball touches. With much blood, sweat, tears and swearing I have accomplished that which seemed impossible just a few months ago. I’ve achieved my greatest accomplishment in Rocket League, and in life, so far. That’s right! I reached Platinum in 1v1. Ha! Only kidding, though I did do that. No, my greatest achievement is more impressive than that; I reached Champion 1 in 3v3. That puts me in the top 10% of all players in that playlist which is staggering. 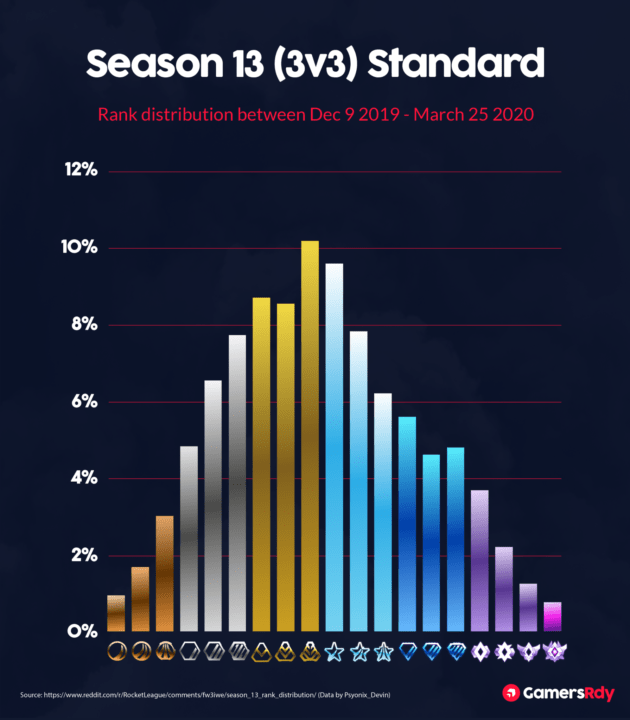 It genuinely wasn’t that long ago that I thought I wouldn’t achieve this. I was struggling to get into, and stay in, the Diamond ranks. I felt like, though I was improving, everyone else was improving faster than I was. I was struggling to stay where I was in terms of rank let alone get promoted. Like an endless tide of players were queuing up to beat me every time I thought I was getting somewhere. At least, that’s how it felt to me. The reality is though, I’ve improved a heck of a lot as a player.

In Season 10, which ended in May 2019, I was low Platinum or Gold in most playlists. As Season 14 draws to a close I’m comfortably in Diamond in 2v2, hit my highest ever rank in 1v1 and, most impressively of all, reached Champion, in 3v3, the very first time; It’s the first time I’ve done that in any playlist. My ranks fluctuate a fair bit, as they do for everyone, as they win or lose each game; but the overall trend is upwards. Getting the 10 wins for the season reward was a struggle. Each time I got promoted to Champ I’d immediately lose the next couple of games and derank back into Diamond. A familiar cycle to any players but I stuck at it and achieved it. I even won a good few games while Champ and stayed there for a while before dropping back down at the time of writing. I’m sure by the time this article is published I’ll have gone up and down a good few more times. My Season 10 Ranks as taken from rocketleague.tracker.network

As I mentioned in my prior article about “The Future of Rocket League” the game works and is so compelling because it is skill based. It’s easy to grasp but difficult to master. It’s the challenge that keeps players engaged. Absolutely everything in Rocket League is a skill that can be learned, understood and used to your advantage. There’s the mechanical skills of controlling your car and the ball but there’s also awareness skills, positioning, kick-offs, 50/50 challenges, boost management and a whole host more.

The thing that amazes me most is that I’ve seen myself improve every step of the way and in all aspects of the game. My improvement has followed a pattern. I’ll recognise a weakness of mine, be it a mechanical skill I lack, positioning mistake, poor decision I’ve made or being unable to read the bounce of the ball. At first I’ll recognise the mistake after it’s gone wrong. Then I’ll recognise it just before. Then earlier and earlier until I stop making the mistake altogether. I’ll suddenly realise that I’m doing much better. Suddenly I’ll be in the right place to make the save or score the goal, suddenly I’ll make the clear after the ball bounces off the corner rather than being befuddled by it and missing. There’s little else so satisfying as realising the progress you’ve made as you are putting it into practice. The trouble is, the better you get, the higher up the ranks you go, the better your opponents will be. When you’re improving and climbing the ranks you always encounter players that are better than you are eventually. Players that are faster to the ball, that read situations quicker, that are more consistent, more accurate and they outplay you. It can feel like you are back at square one when you aren’t. The cycle will repeat itself. You’ll spot where you are going wrong earlier and earlier until eventually you’re getting it right, more often than not, once again.

It’s important to remember that everyone makes mistakes. We’re all human so none of us are perfect. Players at all levels of Rocket League get stuff wrong. They make bad decisions, fumble the ball or mess up a mechanic they’ve done easily the previous hundred times. So, it feels like you’re just as bad as ever when that happens but you’re almost certainly better than you were if you’ve been playing. Rocket League Tracker has helped me keep things in perspective as well. Seeing what percentile of players I’m in in each playlist really helps. I’m in, at least, the top 20% for most of the playlists I play regularly. Having a bad game or twelve doesn’t change the fact I’m actually pretty good at this game. I’m a Champion now. That’s good enough for me… For now.