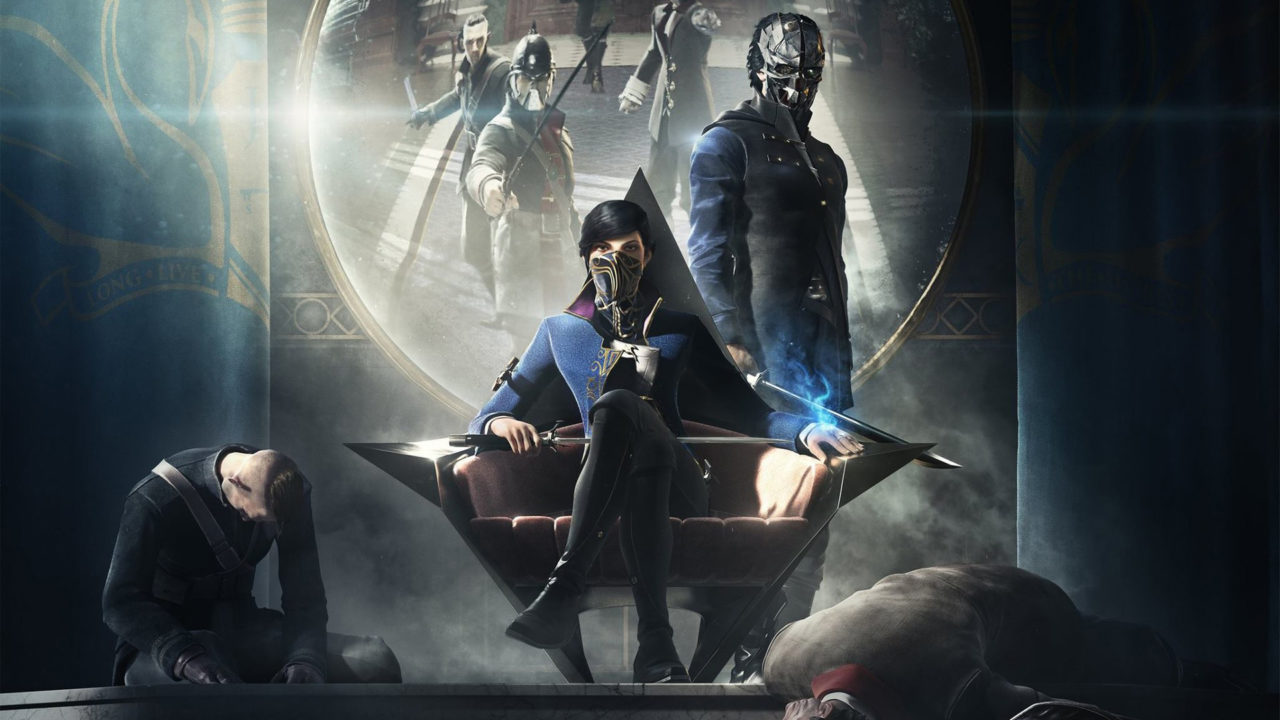 I explore the pain of not discovering the Dishonored games sooner, and how they perfect the balance between narrative and player choice.
by Kyle Barratt 17/11/2020

With the PlayStation 5 on the horizon, I’ve dedicated the past few months of gaming to filling in some of those gaps we all have in our respective gaming knowledge by playing through acclaimed games and franchises that I’ve somehow left untouched. The Bioshock games were fantastic, as were Control and Metro Exodus, and next on my list were the three Dishonored games. I’d bought the trilogy some time ago after finishing Prey, which is probably my favourite game of this past generation. If these games were also produced by Arkane Studios then they must be great too, right? Right. I wish it hadn’t taken me this long to discover Dishonored and its two sequels because years of valuable playtime have passed by. These fantasy stealth action games are some of the best I’ve ever played and, wonderfully, are designed to be replayed in new and exciting ways. The core strength of the Dishonored series (yes, I’m sticking with the American spelling because that’s what how it’s written on the box) is that it has a near-perfect balance between narrative and choice. Each game tells a compelling story set in a fully realised world yet every choice, whether to take out a target lethally or non-lethally, or complete a side objective in a variety of ways, impacts the characters and the narrative. Often in video games I find this fairly annoying; I just want to be told a good story.

For example, I found The Last of Us Part 2 to be a riveting and profound experience because I was being told a story that, despite my pleas, I couldn’t affect the outcome of or make characters do what I wanted. I find that choice and multiple endings in games often leads to weaker, more diluted storytelling and yet that’s not the case for Dishonored. Every potential pathway was narratively rich and meaningful. One where the outcomes felt perfectly in line with my choices and I never felt cheated after making a bold decision because the morality system is clear and understandable.

Set in a world inspired by own but very much not our own, the Dishonored series sees an industrial revolution in full swing across an empire ruled by the Kaldwins. It’s a renaissance for science and art and yet chaotic magic bubbles beneath the surface, granted to individuals by the mysterious deity ‘the Outsider’. And, for some strange reason, everybody has abnormally large hands. In the first game you play as Royal Protector Corvo Attano on a quest to avenge the Empress’s death, save her (and your) daughter, Emily, and eliminate a conspiracy which fills the vacuum of power. As the series progresses, the storylines and world get progressively more complex but the first game succeeds by having a fairly rudimentary narrative. When introducing a fantasy world, it’s best to start with a basic genre plot and then, when the groundwork is done, expand in later instalments. Game of Thrones was a murder mystery for its opening episodes and Dishonored plucks for a seemingly simple quest for revenge to introduce players to its world. The second game picks up 15 years later and offers players a choice right at the beginning: Corvo or Emily. You can pick which protagonist to play as while you track down those responsible for a coup in the city of Karnaca. However, this may be the one choice that does interrupt the narrative flow. Emily is the obvious choice here and it just makes so much more sense to play as her and send her down a possible path of ruthlessness. Corvo already made these moral decisions of whether to kill or spare enemies in the previous game so having him as the lead makes it feel repetitive, although, thankfully, it’s completely optional. The revenge narrative could make the second game feel like a re-tread of the first even with Empress Emily at the helm, but in leaving the city of Dunwall and expanding the world and mythology of the series, Dishonored 2 feels grander than its narrative would initially have you believe.

Choice in the Dishonored series isn’t just limited to a protagonist and the fates of adversaries but every action you can take in the game. The open world levels are ingeniously and impeccably designed. There are so many different paths you can take to reach your objective, whether stealthily or tumultuously, and while some have speed run the game in a matter of minutes, you can easily spend four hours just exploring everything a single level has to offer. To aid exploration and mass murder there’s a selection of supernatural powers gifted to you, although, in classic Dishonored fashion, you can choose to play without them if you wish.

‘Blink’ is the first unlocked and definitely the most helpful, allowing you to teleport short distances. Each protagonist of each game and DLC has a slightly different version of the power to make each feel unique. I’m glad I chose Emily as my character in Dishonored 2 not just for story reasons but because she’s the only character with access to the ‘Domino’ power with allows you to link enemies’ life force together, meaning if you kill one all of them die. It’s very useful if, like me, you want to go the stealthy route but lack, you know, talent.

While Dishonored 3 sadly doesn’t exist (more on that in a minute) there is a short second sequel titled Dishonored: Death of the Outsider which is just as good as the previous two instalments. Continuing a subplot that weaves its way through the series, DotO places us in the shoes of Billie Lurk, an assassin trying to kill the Outsider and end what she sees as the moral corruption of his magic. While little changes in terms of gameplay in the side-quel, it does give us one of the best missions in the whole series: a bank heist. It’s the perfect location for a Dishonored level and overall DotO and Dishonored 2 have much better mission variety than the first game. Some levels in the second game are undeniably masterpieces of gaming. One grants you a device that allows you to travel backwards and forwards between two time periods and explore the same location in two different ways, changing the past to alter the present, and another sees you explore a “clockwork mansion” in which walls and floors of a building move to create new spaces in a labyrinthine way. Curiously, the final missions are the worst in each of the three games.

While I prefer the levels and objectives of the second game, the first has such a powerful atmosphere that the sequels never match. The city of Dunwall is a twisted version of London during the industrial revolution. It’s dark, oppressive and squalid. You really do feel the gloomy pregnant clouds above you and that at any moment there’s just as likely to be a flash of a blade in the moonlight as there is of lightning in the sky. The whole game is very unsettling and moody, and much darker in tone than the sequels. That’s not because the sequels fail but just that they’re trying for something different. While Dunwall is clearly based on London, Karnaca is a Mediterranean coastal city and is striving for a different vibe entirely, with sunny skies and a change in style. I appreciate mixing things up for the sequel but I’d be lying if I didn’t admit I still want to explore more of Dunwall someday. The music is also a key component of the first game’s atmosphere and the score for Dishonored 2 is far less memorable.

While a lot of it is constrained to collectables such as books and other in game documents, the lore of Dishonored is vast and Arkane truly go above and beyond in fleshing out the world of their games. It almost feels as if they’re based on huge novels like The Witcher games so it’s all the more impressive that everything is original gaming content. I would love to expand this world further and a TV series would be perfect. There are so many fascinating characters and factions that could birth all the political intrigue, violence and fantastical elements that the next Game of Thrones needs. Earlier this year, Gennifer Hutchison, who has been a writer on Mad Men, Breaking Bad, Better Call Saul and the upcoming Lord of the Rings series tweeted about her desire to adapt Dishonored to television and, after the playing the games, I think it would be a perfect fit.

While no means a failure, the series is now on hold and its future is uncertain, with Arkane developing Deathloop instead. There does seem to be some subtle set up in Dishonored 2 and Death of the Outsider for a third core game set on the so far unexplored Russian-inspired continent of Tyvia. At least 3 side characters retreat there to begin new lives and I would be very surprised if that’s not where a Dishonored 3 would be set. The overused term “soft reboot” comes to mind and the next game only needs to tangentially connect to ‘The Kaldwin Saga’ now that that storyline has been somewhat concluded. I’m desperate to see this world again now that the Outsider is gone – either dead or freed of his role depending on your actions. Without someone to direct it, is magic now flooding the empire? However, I’m not discounting that next year’s release Deathloop is somehow set in the same fictional universe and there may be an Arkane multiverse of games, including Prey, connected through the mysterious Void.

It pains me that I didn’t discover Dishonored earlier so I could support the franchise financially when the later games were released. But even if these three games are all we ever have, they’re designed to be replayed in a variety of ways. I just need to stop myself from playing the same lethal stealth style every time and approach targets and objectives from new angles, no doubt discovering fresh details about the world as I do so. I’ve already replayed Death of the Outsider, because it’s the shortest, and staying undetected with a clean blade is a different experience entirely to my usually bloody and occasionally noisy exploits. Even at this threshold of next gen, I can see myself returning to Dishonored for years to come.

Are you a fan of the Dishonored games? Which is your favourite mission from the trilogy? Let me know in the comments and be sure to geek out with me about TV, movies and video-games on Twitter @kylebrrtt.

Geek Out Weakly 2 – Spider-man: Into the Spider-Verse