No Man’s Sky: Ecosystems in games

Since Red Dead Redemption released in 2010, not only have you aged six years but most AAA games have followed its lead by including more involved ecosystems. This is particularly true in open world games. Assassin’s Creed 3, Rise of the Tomb Raider and Far Cry all have protagonists that are hunter-gatherers. Metal Gear Solid V: The Phantom Pain put its own spin on this by letting you capture animals to build your own zoo. But the ecosystem was largely the same as Red Dead Redemption, with many blue flowers to collect and bears to shoot in the face.

Next week, we see the release of Hello Games’ very own hype-machine, No Man’s Sky. It promises a near-endless universe to explore with procedurally generated flora and fauna. One of the objectives is to reach the centre of the universe but that’s obviously going to be disappointing, just like the meaning of life would be. It’s probably kitten gifs or something. The more exciting task at hand is discovery.

The variety of environments in No Man’s Sky is impressive. Creatures range from towering brachiosaurus-like beasts to dangly, freakish things that bear little resemblance to any beings on Earth. They’re all procedurally generated, even down to their calls. Animals will abide by daily routines, such as visiting bodies of water to drink and having sleep patterns. There’s also a food chain, and you’re part of it.

Flora is colourful and striking. While vegetation is a resource used for trading and crafting, it’s also a threat with the promise of carnivorous plants. Atmospheres can be toxic or radioactive, and even the temperature can be a threat. The team at Hello Games has put in a lot of effort to make the game diverse and unique. It’s even designed a periodic table for the universe. Looking back at some of the other games I mentioned, it’s obvious that developers want to create interesting ecosystems, but tech is limited and game designers aren’t gods.

Red Dead Redemption’s ecosystem was a great mechanic that was ultimately only present to allow for challenges and a crafting system. Rockstar did have one ace up its sleeve, however. One of the cleverest trophies/achievements was ‘Manifest Destiny’, a reference to the prominent theme that the expansion in North America during the 19th century was justified. To earn the trophy you must kill all the 20 buffalo in the Great Plains. That’s it. Get rid of the buffalo. It’s a reference to the near extinction of the American buffalo during the 19th century, which is strikingly analogous with John Marston’s tale as a cowboy at the end of the American frontier. More importantly, it’s a glimpse of giving the player further agency in an ecosystem.

The Far Cry series did wonders to make animals feel threatening but the animals only interact through violence. The series is fixated on the idea of survival of the fittest, with predators attacking everything in sight. It has great moments, though. I’ll never forget when I defeated a handful of enemies in a base, only to be punted off the edge of a cliff by a disgruntled wild boar. It was a great example of Far Cry’s chaotic emergent gameplay but it was also a reminder of the game’s preoccupation with death.

Environments can’t feel real when the only means of interaction is destruction, whether it be tearing a plant by the roots or felling an animal with an AK. Oh sure, you can sometimes press X to pat a dog or ride an elephant but these are very superficial interactions or an excuse to become a living tank. 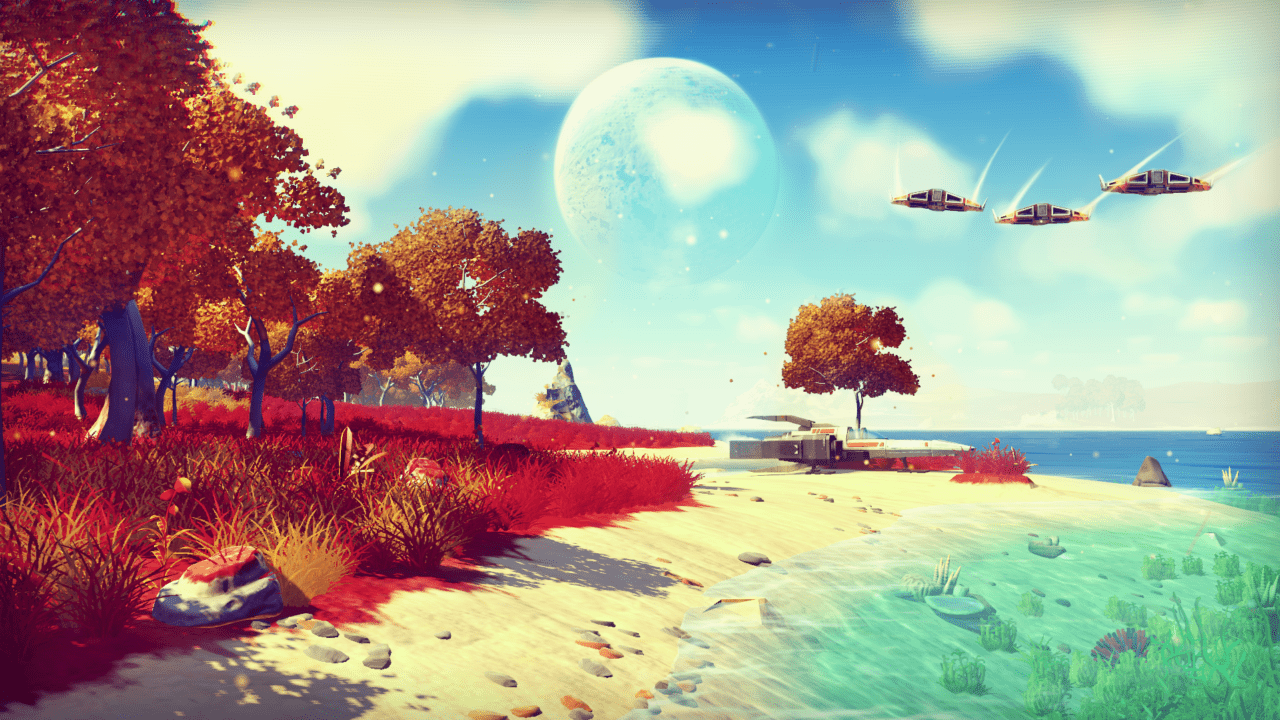 While the ecosystems of No Man’s Sky potentially hold threats around every corner, Hello Games’ main ambition is to create varied worlds for you to marvel at.

Exploration and discovery is encouraged and this could scratch the similar itch at which Pokémon GO is currently clawing. Back in 1996, Pokémon did this with just 151 Pokémon and the simple tag ‘gotta catch ‘em all’. This was irresistible to millions. Incidentally, Pokémon is also a series that allows you to plant and harvest berries. It’s a simple but great mechanic.

No Man Sky is doing the exact opposite of Pokémon by promising a near-limitless amount of species that you can find. There’s the chance that no one else will ever even see the same species, so you can scan it, give it a silly name – ‘willy’ and ‘Sean Murray’s beard’ will inevitably be popular choices – and then upload the data to The Atlas, the database that links the solar systems and players together. It’s basically universe-wide Pokédex.  You’re essentially building a giant anthology for Sean to run to his mother and say, ‘Mum, look at all the stuff I created! I’m a god.’

The promise of such discovery makes it easy to see why No Man’s Sky has captured the imagination of its eager fans. Documenting such findings is exactly what naturalists and explorers such as Alfred Wallace did when travelling the globe. It’s a mechanic that Satoshi Tajiri, the creator of Pokémon, would appreciate having been an avid insect collector as a child. Now you can discover species and traverse an entire universe sat in front of a monitor. 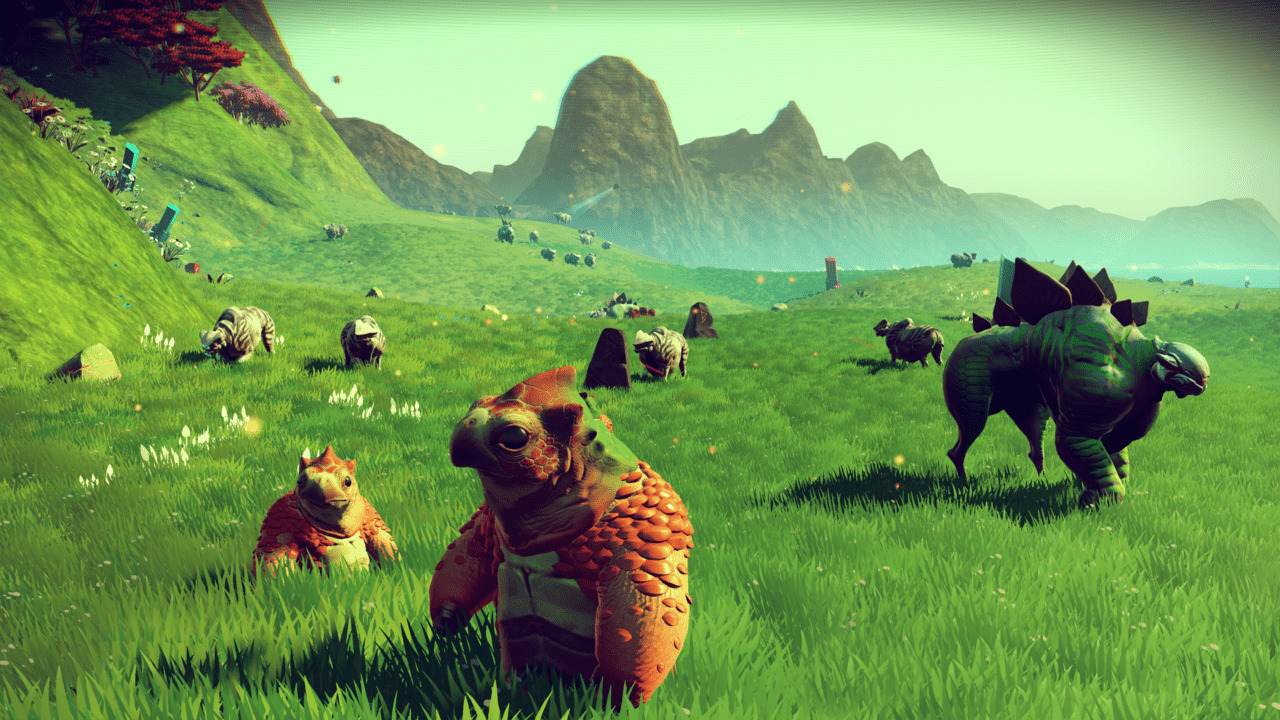 One day it may be possible to have completely interactive and transformable ecosystems with an algorithm maintaining the population numbers. Ecosystems in which the number of plants can be depleted by animals and animals can overpopulate or become extinct. Just imagine being able to completely harvest a particular species of plant that an animal relies on and watching the domino effect this has on the food chain. Or you know, planting a seed for said plant if it really is that vital to the ecosystem. Imagine that, saving something in a video game that isn’t a damsel in distress or Western values.

This is wishful thinking but No Man’s Sky is a step forward for procedurally generated games and hopefully for interactive ecosystems too. Hello Games has taken a popular feature from modern video games and made it the core experience. Discovery awaits.