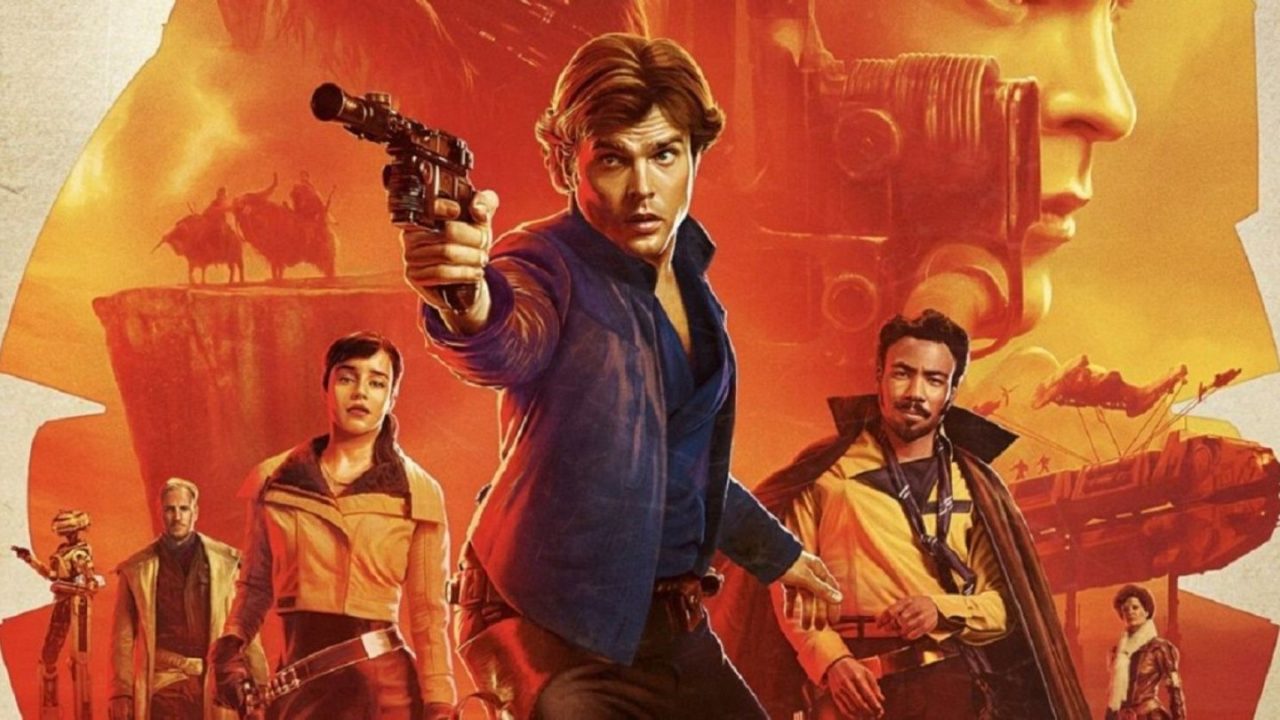 "With less than stellar ticket sales and loose ends left over from Solo, should there be a sequel?"
by Kyle Barratt 05/06/2018

Upon release, Solo seemed less of a film and more like ammunition for the anti-Disney Star Wars fans. While I have some issues with the film and would probably call it my least favourite of the current era of Star Wars movies, I enjoyed Solo and was entertained throughout. Despite this enjoyment, my mindset after watching the film was very similar to what it was before: we don’t need a Han Solo movie. I want new characters, adventures and time periods and it seems many movie goers agree, evident from the film’s disappointing box office takings. While I’m sure some Star Wars fans refusing to go because of how they felt about The Last Jedi had an impact, although minimal, it’s the casual watchers not showing up because they didn’t want a Solo movie in the first place that caused the most damage. So, with less than stellar ticket sales and loose ends left over from Solo, should there be a sequel? And if so, in what form?

Solo ends in an interesting place. Han has the Falcon, Chewie by his side and is on his way to Tatooine to seek out this “big shot gangster putting together a crew”. We could easily leave it there and imagine the adventures Han goes on in the decade between Solo and A New Hope. But then again there are some loose ends that hint at more adventures to come. The thing that Han “pulled” on Lando, the one mentioned in The Empire Strikes Back, could be grabbing the cards from Lando’s sleeve and winning the Falcon as we saw in Solo, or it could be something yet to come. The big set up is of course the surprise appearance of Darth Maul (which I didn’t like), who is set to get revenge on Han with Qi’ra by his side. After not thinking a Solo film was necessary in the first place, and feel free to call me a hypocrite for this, I am actually leaning towards wanting a Solo sequel to answer these questions, but not in the form you might think. I want an animated Solo sequel.

Before I get into why I think animation is the best place to tell this story, let’s look at the other formats available for a Solo sequel. A live-action Solo sequel seems like a no go at this point with Lucasfilm wanting to move on to the next project quickly to take attention away from the poor box office returns. However, that doesn’t mean future films can’t pick up the dangling plot threads and characters, especially with the vastly interconnected canon of Star Wars. James Mangold is rumoured to be directing a Boba Fett movie and it’s possible Han, Chewie and Lando could show up there. Maybe Boba Fett is on a mission that brings him into contact with Maul and Qi’ra and we get Solo resolutions as a subplot in that film. I’m hoping the Boba Fett film isn’t actually a Boba Fett film but more of a general bounty hunters/criminal underworld movie that could very easily act as a proxy Solo sequel with maybe Fett working with Han rather than against him. I will admit that the most likely place for resolutions to Solo’s remaining questions and conflicts is the novels and comics. We’ve just had the novel Last Shot, which I didn’t care for, which was both a prequel and sequel to Solo and I’m sure more ancillary material like that will be on the way soon.

Next year Disney’s own streaming service will launch, causing a huge shake-up in the Netflix-led status quo we have now. We know Jon Favreau’s live-action Star Wars show will air at, or just after, the service’s launch but there will need to be more content available for the service than just one show. Live-action will cost a lot of money with all the sets, CGI and much more costing huge sums of cash so Lucasfilm should double down on their animation efforts. The Clone Wars and Rebels have been wonderful additions to the Star Wars lore with Dave Filoni and his team capturing the magic of Star Wars and I’d love to see them take a crack at animated films, not just TV shows. The streaming service is the perfect places to tell “The Star Wars Stories” while the live-action films can move on to other things. They should be like the DC straight-to-home-entertainment animations that focus on something different each time whether they be sequels to Solo, adaptations of popular canon books and comics or something completely new. A Solo sequel would be much faster and cheaper to produce this way and allow the animation team that revived Maul in The Clone Wars and Rebels, and did a fantastic job, to continue his story. At this moment in time, animation looks like the best place for a Solo sequel.

So, if we do get a Solo sequel, in whatever form, what should the focus be? I was pleasantly surprised that Jabba didn’t appear in Solo and that the focus was on new characters but as Han becomes the Han we know it would make sense for Jabba to appear in the sequel. As for the story, I’d like to see Jabba send Han after some MacGuffin while some other space gangsters have sent their own smugglers and bounty hunters after the same prize. Maul could be after it too and sends Qi’ra which complicates matters for Han. I don’t want Han to encounter Maul directly because he shouldn’t meet a force-user until Ben and Luke in A New Hope but there is nothing in canon to say Lando and Chewie can’t face Maul. Speaking of Chewbacca, I was disappointed the life debt he pledges to Han doesn’t appear in the film despite it being mentioned in canon. Maybe it was just left unsaid to make Chewie’s actions be based more on his friendship with Han but it’s possible the event where Han saves Chewie’s life and the big fuzzball vows to stay by his side has yet to occur. Sana Starros is a great character who has appeared in multiple canon sources and I’d love to see the beginning of her relationship with Han, especially if it leads back to her home planet of Nar Shaddaa which I desperately want to see in a movie. And one final hope I have for the Solo sequel is NO REBELS! I like the Enfys Nest reveal in Solo but the ending where Han decides not to join her and she says something like “maybe one day you’ll feel differently” was too heavy handed for me. I don’t want anymore references to the future Rebellion in these films and the focus from now on should purely be the criminal underworld.

There are my thoughts on how Lucasfilm should tackle a possible Solo sequel, both in terms of medium and content. Do you think there should be a sequel and if so what should it be about? Did you enjoy Solo: A Star Wars Story? Let me know in the comments and geek out with me about TV, movies and video-games on Twitter @kylebrrtt.

Tags
should there be a solo sequelSoloSolo sequelSolo: A Star Wars StoryStar Wars
Categories
ArticleFilmOpinionTV And Movies
SHARE THIS ARTICLE
PREVIOUS ARTICLE