The Agony Of 1v1 in Rocket League

I get so angry at myself it’s frankly ridiculous

So, the new competitive Season has started for Rocket League. In the last season, Season 11, I finally managed to achieve my Diamond Season Rank reward for the first time. The ranks – Bronze, Silver, Gold, Platinum, Diamond, Champion & Grand Champion – are as competitive as ever. In the 4 years that have passed since the game launched the skill ceiling in the game has climbed ever higher. Although I’ve definitely improved as a player over that time, despite my comparatively limited number of hours playing RL, I haven’t climbed into the higher ranks, I’ve stayed fairly consistent. I’ve moved up from Silver in Season 4 to high Gold and Mid Platinum by Season 10. There are 4 competitive playlists – Standard 3v3, Doubles 2v2, Duels 1v1 & Solo Standard 3v3 – of which I’m generally quite consistent in all but one of them. My Current Ranks in Season 12

As you can see in the image above, in 3v3 and 2v2 I’m significantly higher than in 1v1. I haven’t done my ten placement matches for Solo Standard yet but I expect to come in around Platinum 1 or Gold 3; which is where I was at the end of the last season. In Rumble, a game mode that includes power-ups, which has an RNG element to it I finished last season as a Diamond 2. Based on my other rankings you’d expect me to be in a similar ballpark for 1v1, but I’m not. So what is it about 1v1 that’s so different?

The simple answer is; you’re alone. Every mistake gets punished. Miss a shot? Chances are your opponent will score instead. Misjudge a bounce? That’s you another goal down. Any inaccuracies or inconsistencies in the execution of your skills, plays or strategy are brutally exposed in 1v1. There’s no teammate to back you up, no-one is there to tap the ball in when you’ve hit the post with the goal at your mercy. There’s no-one there to stop the ball rolling in when you’ve managed to bump the attacker but aren’t able to get back in time to stop the ball. It’s all on you.

It’s a very different experience playing under that sort of pressure. No element of the game exemplifies this difference better than the Kick-Off. It happens at the start of every game and after every goal. The kick-off and the 10 seconds immediately after it showcases perfectly the difference. In any of the other playlists, a bad kick-off isn’t much of a big deal. Yes, it puts your team under pressure and sometimes it will result in a quick goal for the opposition. But you do have the opportunity to recover and turn it to your advantage the majority of the time. In 1v1 however, if your opponent is better at kick-offs, than you are, the chances are you’ll probably lose. Each time you score, you have to go through the kick-off. It means that you are starting every play on the back foot, you’re under even more pressure, you’ll be low on boost and you’ll inevitably make more mistakes as a result. 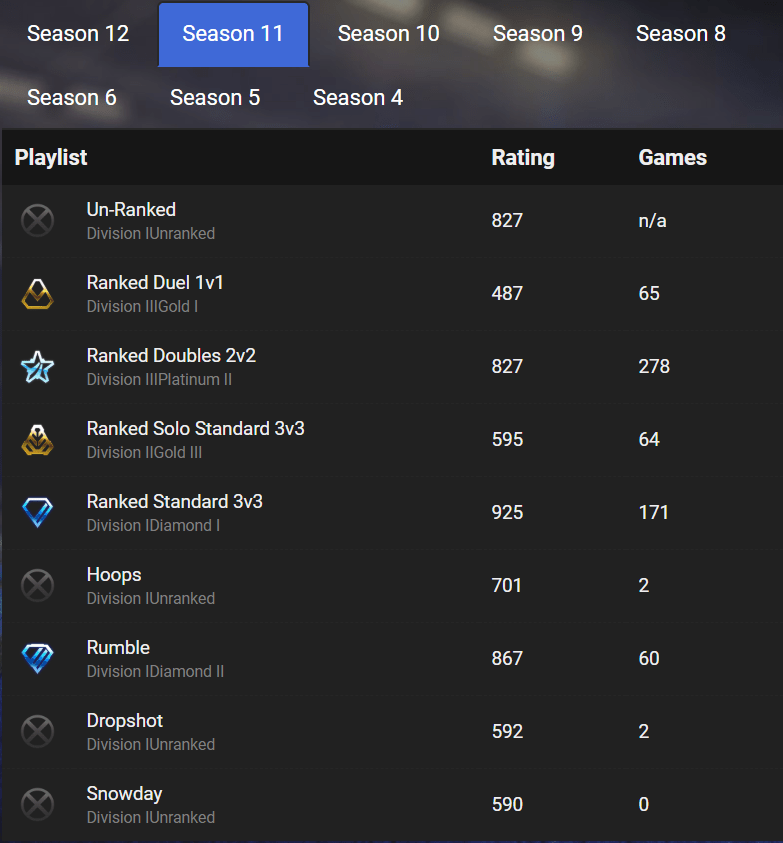 My Season 11 Ranks (taken from rocketleague.tracker.network)

The more difficult answer, for me to admit to at least, is that it’s tough psychologically. When I’m in a team, I’m actually quite relaxed. If I make a mistake it’s no big deal. If my friend manages to save my goal bound shot by mistake it’s funny and I make a video with the replay to mock him for it. We have a laugh and a great time even when we lose. I still get frustrated at times, don’t get me wrong, but it’s usually fleeting. In 1v1 though I get so angry at myself it’s frankly ridiculous. If I’m losing, every little mistake makes me furious. It being 1v1 they invariably lead to my opponent scoring goals which makes me even more furious with myself and results in me making more mistakes. It becomes a vicious cycle that doesn’t break until the game is over. A game that was competitive for 3 minutes, with a score of say 5-4 might turn into an absolute smack down that finishes 11-5 or worse. It’s a continual struggle. You can dial up the anguish to 11 if I’ve had a 4 or 5 goal lead that I’ve let slip away as well. It’s much more psychologically taxing than I’d like.

“Why do I do this to myself?” You might ask. I wonder that myself sometimes but the answer is that I know I’ll become a better player for doing it. If I want to push on and become an established Diamond Rank Player in 3v3 or 2v2, then I need to improve. I need to hit my shots consistently, make my saves, win more kick-offs than I lose and pull my weight in the team. The inconsistencies that 1v1 so effortlessly, and harrowingly, exposes are ones that good teammates can paper over. If you are working well together, you’ll know each other’s strengths and weaknesses and adjust your play to accommodate them as best you can. That’s a process that goes both ways, I do the same for my teammates. One of the best ways to improve the teams performance is to have less weaknesses that need consideration and allow more focus to go on playing to our strengths.

So, my torture regime of 1v1 playing will help inform my training. It’ll help me identify the areas where I need to improve the most. I absolutely love Rocket League and if you haven’t tried it for yourself I implore you to do so. Don’t let this article of nightmares put you off! Just do yourself a favour… play with a friend.

You should watch The Dark Crystal: Age of Resistance